Getting started with AB Powerflex VFD

Getting started with AB Powerflex VFD

To get started with Variable Frequency Drives we have to know why industries are using VFD panels.

As the name explains the VFDs are used to vary the frequency of the AC wave they are receiving and send it to the output where an AC motor is wired.

So ultimately we are using VFD to control the speed of AC motor.

We all have heard of Motor Control Center (MCC) they’re used to give protection to the motors and also used to start the motor in an efficient way.

Now we might have a question whether I should have a separate control to start the motor when we use a VFD?

The answer is we don’t need a separate control when we use a VFD.

Now that we understand why we prefer VFD we are gonna jump on to how it is being used and few steps to control the speed of a motor using AB Powerflex 525 VFD.

This is the control diagram or wiring diagram of the Powerflex 525 VFD, 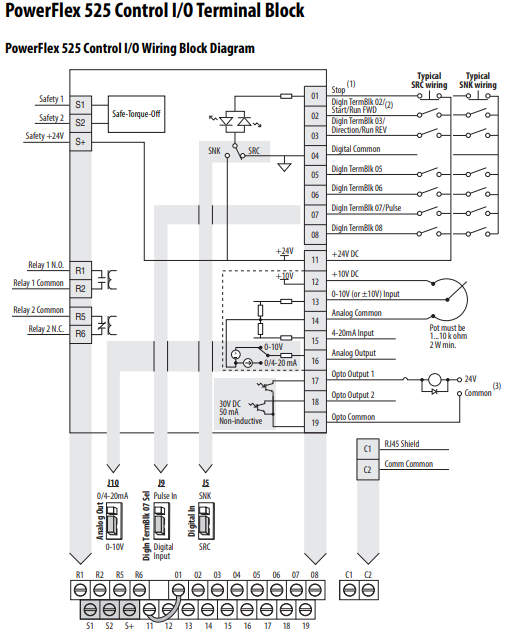 As you can see the terminals have specific names. Each terminal is used in a way to control the motor in a different methods.

To get started we’re gonna see a simplest method to control a AC motor.

Now we’re gonna navigate on display of the VFD and set the following parameters on it.


Now we’ve completed the programming part of the VFD. We’re going to wire it now. 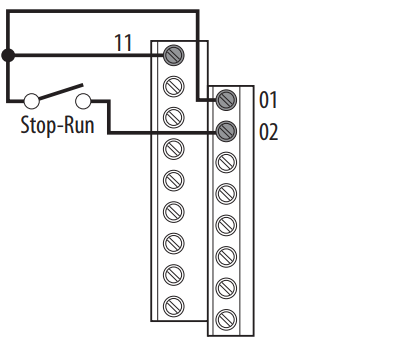 This is one way of wiring when we use the internal supply.

Terminal 11 is a 24v terminal and we’re wiring it to a NO switch and connecting the other end to the terminal two which acts as a source.

So when the switch is made to turn ‘ON’ the motor will start.

Terminal  ‘1’ is called an emergency stop and always a 24v supply is to be wired to it otherwise the VFD won’t give output.

When we cut the 24v while the motor is running the VFD recognizes it as an emergency situation and stops the motor and won’t work until it is made to start again after giving supply to the emergency stop. 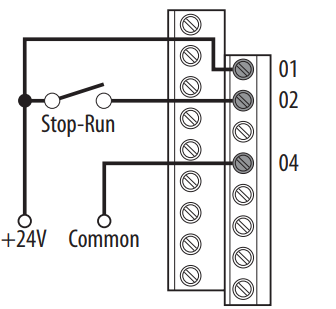 This is another way of wiring when we use an external supply.

Notice that we’re giving a ground connection to terminal 4 to complete the circuit.

We’ve learned the most simplest way of designing and wiring the VFD to run  an AC motor.