Before Entering the topic just a heads up, the images are taken from a book the graphs shown are self-explaining and  I couldn't find a more perfect image.

In this mode of control, the relationship between the controller output and an error signal is a continuous mathematical function. Theoretically, a functional relationship could be of any form; but in practice, the function must be linear. So, for practical purposes, the mathematical functions used in the controller mode are limited to proportional, integral, derivative, and various combinations of these three. 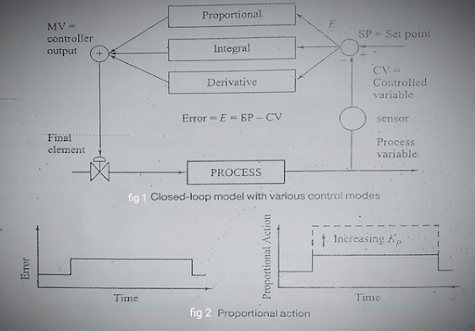 The dynamic behavior of the P controller after a step-change in the error variable figure.

The amplitude of the manipulated variable P is determined by the error Ep and the proportional action Kp. Figures clearly show that a high Kp represents a strongly rising gradient so that even small system deviations can cause strong control actions. 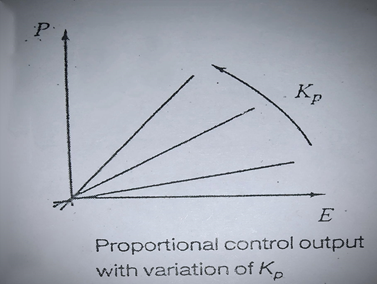 In the ideal control situation, i.e., with zero error. P controllers do not generate control action. Some amplitude is required, however, if the controlled variable is to be kept at any level of equilibrium is a system with self-regulation. In order to achieve this, P controllers have an option for adjusting the operating point. This option is provided by adding a variable offset Po to the P controller.

The governing equation of P controller is

The governing equation of I controller is:

Characteristics of the integral controller are-

The governing equation of derivative controller is:

This controller mode results from the combination of proportional and integral mode. This model combines the advantages of both controller types so that their disadvantages are compensated for at the same time.

The governing equation of the PI controller is:

When there is no error, the controller output remains fixed at Po. We have chosen t=0 as the time at which the observation starts. If the error is not zero, then the proportional term contributes a correction and the integral term begins to increase or decrease the accumulated value, depending on the sign of the error and whether the action is direct or reverse.

The integral term of PI controller causes its output to change as long as the error is non zero. The main advantage of this mode is that it implements one to one correspondence of proportional control, and makes use of integral action to eliminate offset.

The combination is favorable for systems in which large load change occurs. The proportional mode provides the stabilizing influence, while reset (integral) mode provides the necessary action to continue correction until the controlled variable is returned to the set point. This mode can be used in systems subjected to large and frequent load changes. Because of integration time, the process must have relatively slow changes in load to prevent oscillations induced by an integral overshoot. 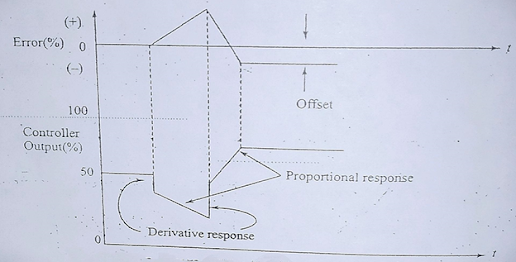 In PD controllers with proportional plus derivative control action, the manipulated variable results from the addition of the individual P and D control elements.

The governing equation of the PD controller is:

The PID mode is the most popular feedback controller algorithm used in industries. It is a robust, easily understood algorithm that can provide an excellent result.

The governing equation of PID controller is: