What is Coriolis/mass flowmeter and how do they work?

There are various principles of flowmeters to measure mass flow rate. But the popular and most commonly used mass flowmeter is Coriolis mass flowmeter. In addition, it also used to measure density and temperature. It is also called an inertial flowmeter. We know that

The following is the construction of the flowmeter,

The Coriolis mass flowmeter consists of split and parallel two U shaped tubes through which fluid flows. It has a drive coil located at the center of the two U-shaped tubes that causes the tubes to vibrate towards and away from each other at their resonant natural frequency. Magnets and sensor assemblies called pickoff coils are at the inlet and outlet of the tubes. As each coil moves through the uniform magnetic field of the magnet it generates a voltage in the form of the sine wave. 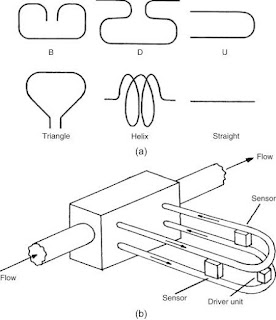 Now let's see how this works,

The sine wave generated by the pickoff coils is the key to measuring the mass flowrate. When the process fluid enters the flow meter these two tubes twist in opposite direction to each other and the amount of twist is detected by both pickoff coils at the inlet and outlet and generates a voltage in the form of sine waves and the sine waves indicate the motion of the one tube relative to the other and the time delay between these two sine waves is directly proportional to the mass flow rate.

The above GIF is the animation of the Coriolis mass flowmeter when there is a flow.
When there is no flow through the flowmeter drive coil continuously will vibrate at its natural resonant frequency and is measured by the pickoff coils and converted to sine waves. Both the sine waves will be in the same phase and thus there is no time delay which means both the tubes are synchronous in motion.

The above GIF is the animation when there is no flow through the tubes.

The below picture gives you an idea of what is Phase shift? 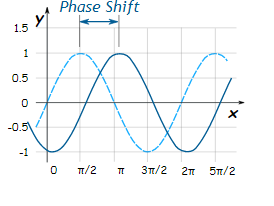 Where f is the frequency of the sine waves.