What is I to P converter? and why are they used?

We all should've heard about control valves and the things they can do by now. To give an overview, they are just valves that open and close when the signal is given to them. Now that being said they can be operated in various ways such as,

Here is where the I to P converter plays the role. To control the movement of the valve, pressure has to be given. Now let's say we are controlling the valve using a PLC. The output signal of the PLC is voltage or current clearly they won't provide pressure to the valve.
So, We are going to convert the current output from the analog output module of the PLC to Pressure.
Hence, the name 'I' to 'P' converters.
Let us get into the working of the I to P converters,  It is a flapper nozzle mechanism that controls the output pressure signal ( 3 to 15 psi ) proportional to the input current signal ( 4 to 20 mA ). The output pressure will change according to the movement of the flapper.
The construction includes,
A flapper nozzle arrangement to control the pressure and an electromagnet and two springs to stable the flapper. 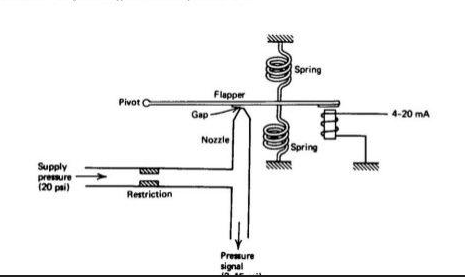