What is LVDT and what are their applications?

LVDT is an inductive transducer that converts linear motion to electrical signals. It is used in the measurement of various physical quantities such as displacement, force, pressure, position, etc. 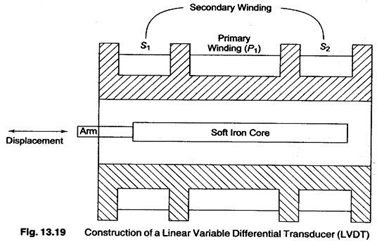 Now let us look into the construction of LVDT,

●     The transformer consists of the primary winding P and two secondary windings S1 and S2 wrapped around the hollow bobbin of non-magnetic material.

●     A soft iron core that moves inside the bobbin is attached to the moving part of the system whose displacement is to be measured.

Now let's see how they work?

●     When the iron core is in the middle of the tube, the flux coupled to the secondary by the primary is equal. This is considered as the reference position.

●     Now the core is moved to the left or to right. As a result of its movement, the flux coupled to the secondary near the core is increased while that coupled to the secondary far from the core is reduced. Hence the induced emf in both the secondaries are different and their difference is obtained across the output, firstly, where the two secondaries are connected in series opposition. The output voltage varies linearly with displacement for small displacement while for large displacements the variation between displacement and output is parabolic. Secondly, it is clear from the graph shown that output voltage is non-zero at the reference position. This is due to the presence of stray magnetic and electric fields and harmonics present in the input to the primary.

Some of the applications of LVDT are, 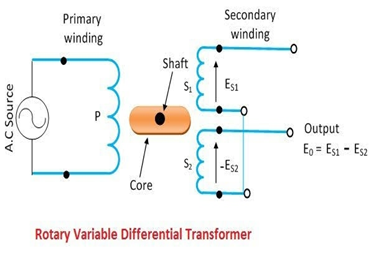 LVDT used to measure angular displacement is also called RVDT. In the circuit shown in the figure input of shaft fastened to the core is mounted on the center of the coil-former on which primary and secondary are mounted symmetrically. The core is so chosen that it gives linear output over a specified angle of rotation. As the angular displacement of, the system takes place the core coupled to it moves correspondingly.

Measurement of force by LVDT:

Force and pressure are related by the expression, force= pressure×area in the direction of the force. The measurement of force is, therefore, similar to the measurement of pressure. We apply pressure on a given area and measure it. The force is thus computed by the relation given above.

●     The LVDT has low power consumption.

●     LVDT gets affected by vibrations and temperature.