Vortex flowmeter is a type of flowmeter that works on the principle of Karman vortex street which is used to measure fluid flow in volumetric flowrate. When the medium passes through an obstruction ( shedder bar ) whose flow rate has to be measured, it causes the medium to separate and form alternating pressure frequency of vortices around the backside of the shedder bar.

WHAT IS KARMAN VORTEX STREET:

This principle states, that when there is an obstruction in the flow path, a pattern of swirling vortices is generated continuously. 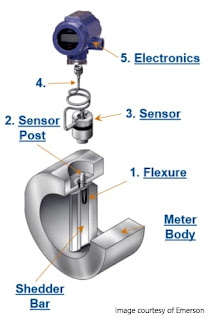 It is compatible with a wide range of applications and can withstand high temperatures and pressures.

The meter body is available in a variety of configurations and multivariable capabilities that measure the volumetric flow and also density depends on the process temperature and pressure. If volumetric flow rate and density are known then mass flow rate can be calculated.